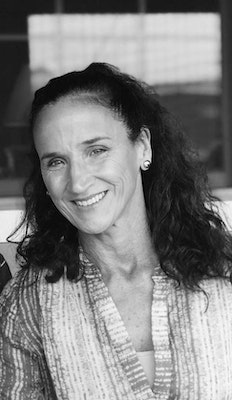 As a tomboy who grew up in Gloucester Massachusetts, Francie’s love of physical movement began in her early childhood.  Whether she was hanging from a tree, or seeing how far she could walk along a chain linked fence without falling, she was always pushing herself to be faster and stronger.  In school, she competed in both gymnastics and track.  She was a sprinter and long jumper who could leap far.


After graduation, she didn’t stop moving – she just headed to the gym.
In 2002, she found yoga at Yoga for Health with Janet Green Garrison. At the time, it was one of the onlyyoga studios around.  She loved it immediately, but could only make classes sporadically because her kids were young.  So, when her family was asleep, she’d put on her running sneakers, and hit the
pavement.  The change from sprinter to a long-distance runner didn’t come easily, but it checked the exercise/movement box.  Eventually she looked forward to her early morning runs, because it’s where she had her clearest thoughts.  Unfortunately, too many injuries occurred and she knew there had to be a shift.  So, she made her way back to yoga.


Unsurprisingly, Francie was first drawn to yoga for its physical benefits.  But over time, her practice became an expression of her truest self and a way for her to nurture her emotional wellbeing. After a dedicated six-year yoga practice, Francie completed her 200 hour Yoga Teacher Training at Treetop Yoga Studio with Annakathryn Carlson.  She has a genuine love of the body’s capabilities, and loves being upside-down, arm balances, and getting lost in the music during a vinyasa flow class.  She has felt the power of silence in a room full of practitioners.


Francie is honored to be a part of the Dark Star Yoga & Wellness community where building connections with others allows us to show up, be seen, and share a love for yoga together.